Introduction to the 2014 Annual

We have also made progress as a field in our thinking about authorship, copyright, and intellectual property, particularly in the area of open access. At the March 2015 meeting of the CCCC-IP Caucus, Heather Joseph, Executive Director of SPARC (the Scholarly Publishing and Academic Resources Coalition), spoke to us about several developments in open access research and publishing. She mentioned the Creative Commons Attribution license (CC-BY) as the most progressive standard of open access, allowing not only copying and distribution of published research, but the uses now possible with new research methods enabled by software code, such as data visualization and topic modeling. For fully open access, as well as for accessibility (for example, creating audio recordings of the CCCC-IP Annual for people with particular disabilities) derivative works should be allowed. Since 2007, we have used the Creative Commons Attribution-Noncommercial Use-No Derivative Works license, which is really only one step up from fair use: readers simply had permission to copy and distribute the full CCCC-IP Annual. We have now decided, though, to adopt a CC-BY license.

The Caucus and the Committee continue to work to keep the CCCC membership informed about intellectual property issues that work in favor of, or against, the interests of students and teachers, and readers and writers more generally. We recently applied for and received status as a CCCC Standing Group, and at the 2014 CCCC, we presented a panel about the history of the Caucus and our accomplishments. Many, many articles, book chapters, books, and special issues of journals have come out of Caucus meetings, as well as campus-specific advocacy. However, we still have work to do on several fronts, both legal and pedagogical. One of particular interest to me is plagiarism detection services, which I want to re-frame, as we go into the second half of 2015, as automated plagiarism detection. The Caucus proposed a CCCC resolution about the use of plagiarism detection services, which was passed in 2013:

Whereas CCCC does not endorse PDSs;

Whereas plagiarism detection services can compromise academic integrity by potentially undermining students’ agency as writers, treating all students as always already plagiarists, creating a hostile learning environment, shifting the responsibility of identifying and interpreting source misuse from teachers to technology, and compelling students to agree to licensing agreements that threaten their privacy and rights to their own intellectual property;

Whereas plagiarism detection services potentially negatively change the role of the writing teacher; construct ill-conceived notions of originality and writing; disavow the complexities of writing in and with networked, digital technologies; and treat students as non-writers; and

Whereas composition teacher-scholars can intervene and combat the potential negative influences of PDSs by educating colleagues about the realities of plagiarism and the troubling outcomes of using PDSs; advocating actively against the adoption of such services; modeling and sharing ideas for productive writing pedagogy; and conducting research into alternative pedagogical strategies to address plagiarism, including honor codes and process pedagogy;

BE IT THEREFORE RESOLVED that the Conference on College Composition and Communication commends institutions who offer sound pedagogical alternatives to the use of PDSs and encourages institutions who use PDSs to implement practices that are in the best interest of their students, including notifying students at the beginning of the term that the service will be used; providing students a non-coercive and convenient opt-out process; and inviting students to submit drafts to the service before turning in final text.

While the above resolution represents what many of us agree to be the case about plagiarism detection services, of which Turnitin is the main PDS provider, there is also this grim but correct observation from Rebecca Moore Howard, posted on the Writing Program Administration listserv (emphasis in original):

Turnitin has become like abortion and the death penalty: A topic on which people are making decisions based on deeply held beliefs inaccessible to logos. I visit faculties at several campuses every year, and in each audience are instructors who cannot imagine teaching without Turnitin. I am in a post-debate state with such people, unwilling any longer to search for the common ground on which we will exchange principles and consider possibilities, at the end of which these folks will return to Mother Turnitin against all reason. I just tell folks why I don’t use it, and turn to another topic. No one has ever said to me, “You know, I thought about what you said, and I changed my practice.” No one.

IIn tandem with the discourse about Turnitin is the discourse about the Common Core State Standards Initiative and its assessments of writing, which according to some reports are set to use AES, or Automated Essay Scoring. Teachers and administrators in K-12 and higher education, as well as students and parents, have expressed serious concerns about this plan. I see an opportunity to re-frame plagiarism detection services in order to show what those of us studying intellectual property and composition have understood for years: that AES and PDS are basically the same – artificial reading that replaces quality instruction and contextualized feedback on student writing. Hence I propose automated plagiarism detection. Also, because I included image macros (known more commonly as memes, though these are only one kind of meme) in the introduction of last year’s CCCC-IP Annual, I will end with these two image macros I created for the occasion. Though facetious, they are yet a potent way to communicate a point. 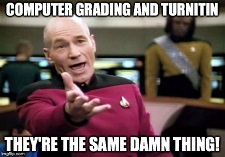