Introduction to the 2013 CCCC-IP Annual

This is the ninth volume of the CCCC Intellectual Property Annual, my seventh as editor. I’ve been reflecting lately about the type of authorship we engage in as we create the CCCC Intellectual Property Annual each year. This publication is not quite like a typical edited collection or issue of a journal. Ever since John Logie started the Annual, the calls for submissions included specific suggested topics – events that took place over the previous year in copyright and intellectual property news. I followed suit when I took over; I suggested a few topics, but when those were claimed, there were other people who also wanted to write for the Annual. I encouraged them to write about any topic they found interesting, but they preferred that I provide a list of additional topics.

So that’s been my invention process: I collect news over the course of the year, and toward the end of each calendar year, I sift through the archives of the Creative Commons blog and the Electronic Frontier Foundation blog, and I generate a list of events for contributors to write about. I post this list, first to the IP Caucus list, and then to the other rhetoric and composition listservs, while still inviting people to write about other events. People claim the subjects they want to write about, and before too long, the new CCCC-IP Annual is published. What I do could be called distributed authorship, macro-authorship, cooperative authorship, or delegated authorship. I’m thinking of doing something similar in my first-year writing classes, but on a subject selected by the students.

The 2013 Annual features a report from Mike Edwards about Elsevier’s ordering scholars to take down the copies of their journal articles that they’d posted to academia.edu and the counter-movement among some professors who pledge not to review for or submit articles to journals published by Elsevier. Laurie Cubbison explores the debate about whether or not Arthur Conan Doyle’s work can be legally considered as an oeuvre for copyright purposes — some stories are in the public domain, but the last one in the series is still under copyright, so are the characters protected?

Chris Gerben gives us an overview of the Copyright Alert System — ISPs detect possible copyright infringement and send “warnings” to users, with the possible slowing down of their internet speed. Copyright activists, Gerben claims, overreacted to the CAS when it was formed, and calls for a more measured rhetorical response when encountering such content industry strategies. Timothy Amidon reports the problems in the formation of the Trans-Pacific Partnership, which seems to be in a star chamber. It stands to extend all the nations’ copyright terms to those of the Digital Millennium Copyright Act, and the architectural regulation of software will inhibit free exchange of ideas.

One of the more memorable copyright skirmishes from 2013 was toy company GoldieBlox’s use of the song “Girls” by the Beastie Boys in their online commercial. Kyle Stedman gives us a very lucid parsing of the various factors in play in this case. Traci Zimmerman reviews The Future of Creative Commons: Realizing the Value of Sharing in a Digital World, which reflects on Creative Commons’ accomplishments over the last decade and gives an idea of what their future plans are, including translating their documents into multiple languages and making their licenses truly global in reach. Finally, Kim Gainer walks us through the fair use test as applied by the court to Google’s digitization of books.

I will close by saying that we are now well into 2014, and I am gearing up for the next issue of the CCCC Intellectual Property Annual. I don’t want to give any spoilers, but I will say that I want to be a bit less conventional regarding genre in the future. When John Logie first started the Annual, he described the articles he was looking for as “a step up from a blog post.” Certainly we will still have several of those. However, I would like to branch out into listicles (“Ten Things Rhetoric and Composition Teachers Need to Know about _____”), short tweet-style annotated bibliographies, and image macros or someecards with brief accompanying analyses. Taking the humor about authorship seriously can yield some insights that we can share with each other and with students. Here are some examples, the last, and cleverest, one by Collin Brooke. 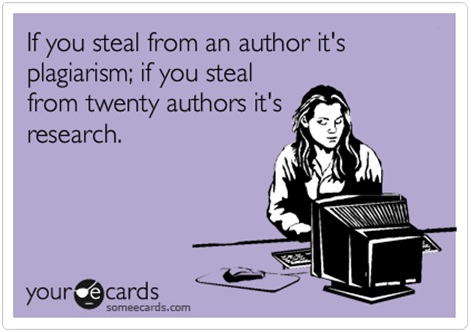 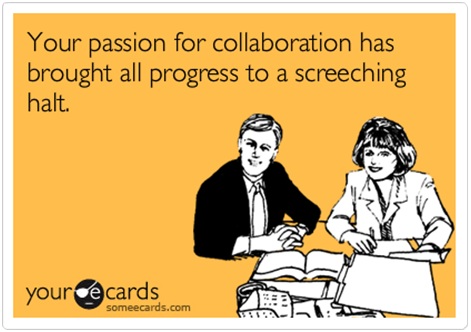 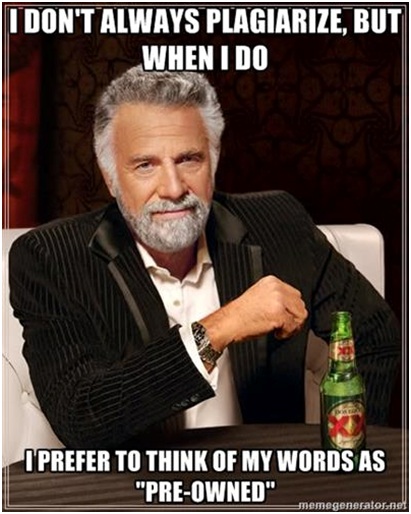